In the first chapter of John’s Gospel, John the Baptist refers to Jesus twice as the “Lamb of God.” This is the first title given to Jesus in John’s Gospel, after the Prologue. This is also the only time in all of Scripture that the phrase “Lamb of God” is used, which makes it especially difficult to decipher. New Testament scholar Sandra Schneiders believes that “somehow, everything is contained, like the oak in the acorn, in this foundational identification [of Jesus as the Lamb of God].” When I first came to Christ Church Eureka, we were using the beautiful dove of the rose window as our church logo. I still love to use that logo, especially during Pentecost because the dove is a symbol of the Holy Spirit.

However, because we as a church are named after Jesus Christ, I thought a symbol of Christ would be more appropriate so I resurrected the old logo of the Lamb, the Agnus Dei, the title given to Jesus in our Gospel this morning. So what does it mean?

Although sheep show up all throughout Scripture, in poetry, narratives and rituals, most scholars agree that the author of John is here referring to the Lamb of the Passover feast, the Paschal Lamb. So let us briefly turn our attention to the story of the Passover, as told in Exodus 12. I invite you to open your Bibles to Exodus 12:21-23 in which Moses, inspired by God, tells his people to slaughter an unblemished lamb as a Passover offering for each family. While the slaughtered lamb was enjoyed as a meal for the families, Moses told the elders to smear the blood of the lamb on the lintel of their door so that the “Destroyer” would pass over the house and not kill the firstborn son of the house. (This ancient ritual is actually not too unlike what we did a couple weeks ago when we chalked the lintel of our doors and prayed for God’s blessing and protection over this building and community for the new year. And I’m glad we did since we need protection here; and a part of me honestly believes that our blessing from last year helped protect this building from serious damage when someone started a fire at our front door a few months ago). 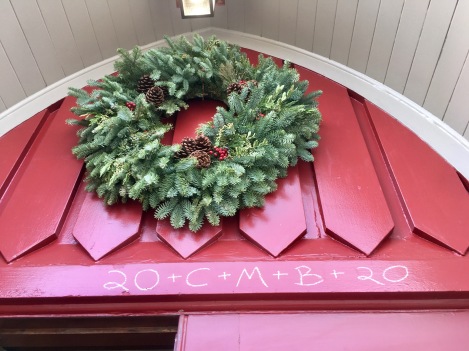 Now the idea of God smiting firstborn children or permitting a so-called “Destroyer” to smite children is a disturbing one indeed. However, we must remember that whenever God says or does something in the Scriptures that might appear to be violent and abusive towards innocent victims, we are invited to read, mark, learn and interpret more carefully, creatively and prayerfully, in light of Christ’s explicit mission to protect and liberate the oppressed. So let us consider a more careful, creative and prayerful reading of the Passover in light of Christ’s explicit mission to protect the vulnerable and liberate the oppressed. Just as our Jewish siblings create prayerful and imaginative readings of Scripture called midrash, this is my midrash which helps me re-imagine the context of the Passover lamb.

Let us remember that this Passover takes place after nine disastrous plagues have pummeled Egypt. You may recall the plagues of frogs, boils, locusts, and darkness etc., plagues that initially sound like they belong in the realm of fairy tale, but can actually be explained fairly well by scientists today, especially when understood as the ecological consequences of nearby volcanic activity (and there is actually record of a major volcanic eruption on Santorini island at around the same time). When it comes to the tenth plague that wipes out the firstborn of Egypt, however, scientists fail to provide any convincing explanation. This is where anthropologists step in and remind us of the ubiquitous ritual performed by ancient cultures, especially during times of extreme crisis: and that is the disturbing ritual of human sacrifice, specifically child sacrifice. Generally, this ritual is performed in order to try appeasing the apparently angry gods.

So after nine disastrous plagues in a row, the Egyptian priests may have felt as if their gods were furious with them and demanded some kind of bloody placation. So the priests may have reverted to child sacrifice.[2] This is not hard to imagine since the first chapter of Exodus describes the Pharaoh’s orders to drown every Hebrew boy in the Nile river (see Ex 1:22). But now it appears that everyone in Egypt is required to sacrifice their firstborn son in order to appease the angry gods, including the Pharaoh himself. And so in order to ensure that every house obeyed this dreadful ordinance, the Egyptian priests may have required each family to show proof of their obedience by wiping the blood of their firstborn son on their door. If there was no blood seen on the door, the Egyptians priests would have to perform the dreadful ritual themselves, thus functioning collectively as the “Destroyer.”

The Hebrew people, however, did not believe in a God who needed to be appeased by child sacrifice or any human sacrifice for that matter. They learned that from their great father Abraham (in Genesis 22). So in a moment of divine inspiration, they decided to play a little trick on the Egyptian priests. Instead of sacrificing their children, they would sacrifice a lamb and use the lamb’s blood on their door to make the priests think that they sacrificed their children. So while all the threat of the Destroyer loomed over the streets of Egypt, the Hebrew families were actually enjoying a delicious lamb dinner with their beloved children. They were enjoying the lamb of God, whose sacrifice and whose blood saved the lives of hundreds (if not thousands) of young children. 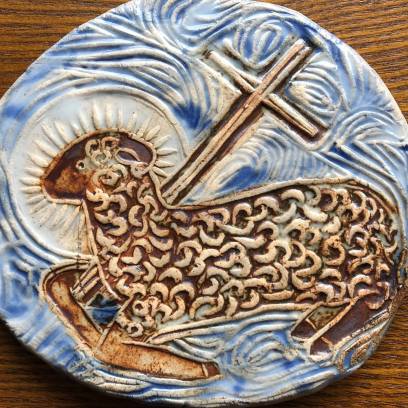 So how does this help us understand “the Lamb of God who takes away the sins of the world” and “Christ our Passover who is sacrificed for us”? It helps us to understand Jesus as the living embodiment of God’s creative subversion of human violence, Jesus as that amazing trick that God plays on our dreadful and death-dealing theologies. Jesus offers himself as a bloody sacrifice in order to end all bloody sacrifices, in order to make it abundantly clear that it is not God who demands bloodshed, it is us. And God is constantly giving Godself to us, sometimes as a Lamb in order to appease our own violence but ultimately in order to liberate us from violence altogether.

Although we have just barely scratched the thick, wooly surface of the deep theological meaning of the “Lamb of God,” I hope that these terms “Lamb of God” and “Christ our Passover” are starting to glimmer with a new attraction and exciting mystery, the Paschal mystery, as it is often called. Let us continue to plumb the depths of these foundational identifications of Christ wherein is contained everything, like the oak in the acorn. And when we break the bread together, let us remember the Lamb of God who gave himself for us in love so that we may be freed from death and from our own violence and therefore enjoy together the peaceful and heavenly feast, the great Supper of the Lamb of God. Amen.